The Night Joan Rivers Almost Came to the Five Towns 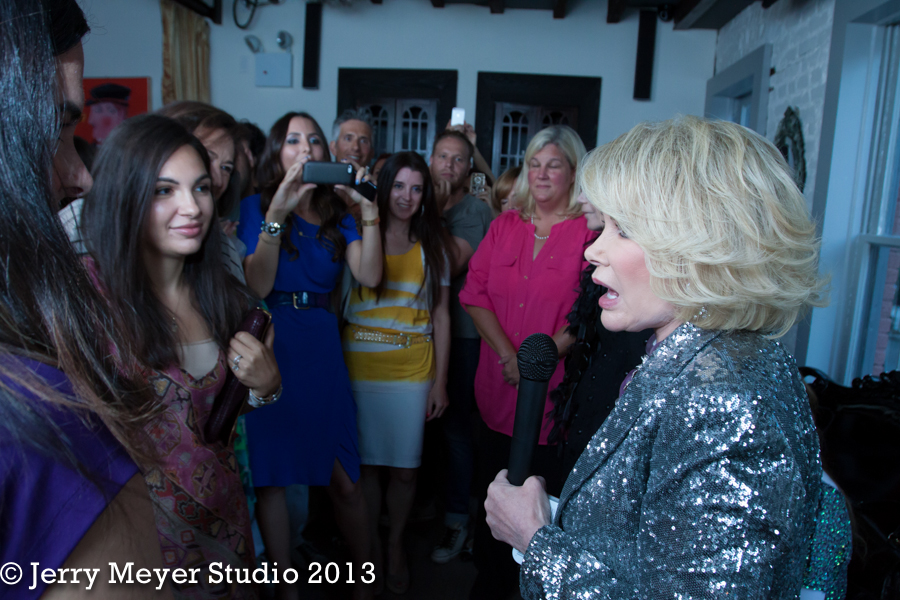 The Night Joan Rivers Almost Came to the Five Towns

by Michal Weinstein
“Would you be interested in doing a Couture for a Cause Event for Renewal if we can get Joan Rivers…” My friend Sharon Langert, AKA. Fashionisha, who just donated a kidney through Renewal asked me that question one day. It had been over 2 years since our last CFAC event. We already had 3 successful fundraisers under our belt, but to be honest each event takes so much out of you that we were not even thinking of the next. Months of putting everything on hold, be it your business, your free and not so free time, to pull off an amazing fashion and raffle show that also raises a lot of money for the given charity that we choose, causes us to think long and hard every time we decide to do it again. But to be able to get the great Joan Rivers…..

“Sharon, If you can get Joan Rivers at no cost I don’t think we would have a choice. Of course we would do it. But what are the chances?”

Joan Rivers got involved with Renewal when her dear friend Henry needed a kidney transplant. Renewal helped Henry get a kidney and in turn Joan, grateful to them, told Renewal that if they ever need any help fundraising she would be more than happy to make an appearance. But would Renewal agree to use that favor for a CFAC event. Would Joan really come through? It sounded like a far reach.

One day Sharon and I attended a Fashion Show during Fashion week in NYC and who happens to be there? Joan herself! We decided to introduce ourselves to her and feel her out. Sharon approached her and not only was she warm and receptive but she seemed genuinely interested and told Sharon to contact her people. Fast forward…she agreed at no cost at all, Renewal agreed to letting us host her and we settled on a date in June 2013. This is a woman who gets 50K for her appearances coming to our event for FREE! It felt like a dream.

And so our event began to take hold. Our theme: “Joys of Life” . Our designers “Raquel” and ”Zoe Ltd.” Who specialize in Simcha clothing. Having Joan as our headliner predictably upped this event to an entirely new level. We received incredibly generous raffles. We got a large amount of sponsors. General tickets were gone 6 weeks before the event as well as the 75 $500 VIP tickets that allowed people to actually meet Joan.  It was the hottest ticket in town and people were put on a waiting list incase we were able to squeeze more in. This was all thanks to Joan Rivers. To have such a legend come to the Five Towns was something many intuitively did not want to miss.

It was the day before the event and we were at Temple Israel setting up when Sharon gets an urgent email from Joan’s assistant.
“Call us right away.”
Up until then there was still a part of us that didn’t believe this would really happen. Well, our nightmare came true when we were told Joan’s sister had died. She would be sitting Shiva. She would not be able to attend.

I can’t even begin to describe the horrific feeling knowing that this event, centered around JOAN RIVERS, would no longer have the main attraction. What about the VIP’s who paid $500 to see her….this was a disaster!  Frantically we tried salvaging this situation by finding another celebrity. The only ones available were either completely not appropriate or a fortune. There was no way we could find someone within such short notice. We decided to hire the comedian Modi so at least our VIP room had something special. But what do we tell everyone who purchased tickets just to see Joan. We opted for the truth.

We sent out a mass email to all our guests:
“Tomorrow night is the big night! We are so excited about the Couture for a Cause event that we have been working on for months. Life is unpredictable and although our event focuses on the joys of life, sometimes sorrows are inevitable. It is on that note we regret to inform you of the passing of Joan River’s sister earlier today. We at Couture for a Cause would like to offer our condolences to Joan and her family, and sadly for our event, her presence will be missed. But the good news is, the show must go on…
If anyone feels that they would like a refund, please email info@coutureforacauseny.com with the email you used to pay for the ticket and the name your ticket is under and your money will be refunded.”

And here’s where the beauty and kindness of the Five Towns women came through. Out of 600+ guests only 10 asked for a refund. And the show did go on! And it was a night to remember. The clothing was spectacular. The raffles were incredible. Everyone had a blast and lots of money was raised for Renewal and Shirat Devorah (a charity we decided to add so we could help a local woman with ALS).

Now Joan had every right to move on and not think about our little event. Many celebrities would do exactly that. But true to her word she decided to come through for us for another smaller exclusive event in NYC for our VIP’s who had paid originally $500 to meet her. Until Joan stepped out of her car we were not sure if this would come to fruition, but she came dressed in a dazzling silver jacket looking glamorous. She hung around for almost 2 hours taking pictures with each and every guest and schmoozing. She was gracious, complimentary and of course hilarious. Everyone left feeling great and we were so grateful CFAC didn’t disappoint our guests.

I gained a newfound respect for her experiencing her work ethic and knowing she did this at no cost out of the goodness of her heart for her friend, but my respect for her reached a whole new level over a year later when I saw the viral video of her voicing her support for Israel. Not only was it funny, it was incredibly brave. During a time when supporting Israel was politically incorrect and unpopular Joan, being Joan, didn’t give a hoot and like always, said it like it is. Excitedly I shared this video on the Couture facebook page because we feel a connection to her and were proud of her.

During the VIP event, Joan offered to attend our next event, and though we made a vow to never advertise any celebrity again due to the unpredictable nature of doing that, we were very much going to take her up on the offer.

Sadly she passed away at 81. She was vibrant and healthy and had every single one of her facilities till the end and she had so much more to give. We will forever remember the night we met her, how she came through in the end and how even without coming, she was responsible for making our event a tremendous success. Baruch Dayan Emet.