A long-awaited event is finally about to take place. It is the high-profile charity happening, Couture for a Cause, in Lawrence on June 4, featuring comedienne and TV personality Joan Rivers as well as a much-anticipated fashion show by Raquel of Cedarhurst and children’s wear by Zoe Ltd. Proceeds from the function will benefit a Jewish kidney organization and Shiras Devora benefiting an ALS patient, Devora Schochet of Woodmere.

“This is going to be our biggest benefit yet,” said event co-coordinator Michal Weinstein, who put this extravaganza together with Esther Silber-Berg Sharon Langert, and Breezy Beckerman of the famous Breezy’s on Central Avenue.

It is wonderful as well as interesting how an allure for fashion can be turned into a remarkable chessed event that can contribute in a significant way to those in need. Who would have thought that the idea to simply want to go shopping or dress well could be converted into such a popular happening?

Shopping for clothing, whether before yom tov or for a special occasion, at some of the popular local Five Towns clothing emporiums like Raquel, David’s Den, Esti’s, Mezzo, Debbie’s Closet, Orly, Fame, and Junee’s becomes elevated to another level. There are additional possibilities in some of the great consignment shops like that of my good friend, Debbie Rudinsky, one of the proprietors of Emperors Old Clothes in Cedarhurst, or Michele Dealbert’s fabulous shop, Look Twice, filled with spectacular designer clothing, handbags, jewelry, and accessories located in Rockville Center, and the new addition to the mix, Couture Club in Cedarhurst.

On the subject of vintage clothing that I have been a fan of for many years, it is always intriguing and entertaining to delve into the names of some of these shops like Consign of the Times and STA, or Second Time Around, both in South Beach in Florida as well as other popular shops of this type around the country. I even came across one such vintage shop in central Tel Aviv filled with well-appointed fashions from France.

The June 4 event in Lawrence will feature a great fashion show with local talent as well as great food provided by Morrell Caterers at Temple Israel. For Ms. Weinstein and friends this is their fourth Couture for a Cause event that revolves around great fashion. “We selected Raquel because she is a well-known, great, and talented local designer who brings a lot to the table for us,” she said. Weinstein adds that there will also be a children’s fashion show featuring Zoe Ltd. courtesy of Susan Mandel and Blimi Chesir.

“It will be a show with a traditional red carpet runway featuring long gowns, short cocktails, a splash of metallic, as well as styles featuring embroidery and embellishments,” says Raquel Urbach of the popular Raquel Couture on Central Avenue and many other locations around the United States and Israel.

We asked about this year’s colors to which Raquel explained, “This year we will have neutrals as well as gold and silver and a special emphasis this season on particular jewel tones will be very popular.” She explains that bridal gowns will have a romantic and contemporary feel, some straitlaced and others more ballroom-like.”

On the matter of what sets apart Five Towns shoppers from those in other areas, Raquel says, “Five Towns women understand couture and are educated consumers who know what they want.” She adds, “They know a well-constructed garment when they see and wear it. The mothers of brides are younger and want to dress age appropriate, not like matrons of the past.”

In addition to the fashion shows, there is going to be a great party at this long-awaited event that is limited to 450 people. The evening has been sold out for weeks with over 400 people unfortunately turned away due to the limitation of space at the venue—Temple Israel in Lawrence. But that does not mean that you cannot participate in supporting these two vital lifesaving and life-giving causes.

“We are giving away over $100,000 in prizes to those who purchase raffles,” says Breezy Beckerman. Some of the prizes and gifts include $3,000 in jewelry provided by Jen Krup, tickets to an upcoming Joan Rivers show, a backstage meeting with Ms. Rivers and gifts of her line of jewelry that she sell on QVC, a $500 gift certificate to Breezy’s, a Freeda wig, an interior design package by Rachel Perisa, and much more.

For those not attending the June 4 program at Temple Israel or who do not want to be distracted at the opulent cocktail hour, raffle tickets can be purchased at Breezy’s in Cedarhurst or online.

Blimi Chesir of Zoe Ltd. told us, “We are honored to be able to participate in this important event and that we were selected by the committee to be part of the program on children’ fashion.” Zoe Ltd. manufactures high end children’s wear specializing in day, evening, bridal, and custom designs in sizes for girls 4 to 14. Blimi says that as far as next season’s fashion, they are focused on metallic, pop of neon color, and, as always, pretty pastels. “Our objective is to appeal to young ladies and their mothers and that they enjoy the experience.”

“I think we are bringing the community together and reaching out in an extraordinary way,” says Ms. Weinstein. “We are very enthusiastic about having such an impact on people’s lives,” she said. For Ms. Schochet of Woodmere and the focus on her personal battle with ALS, she recently said, “It felt odd at first, but then felt incredible to know that friends care enough and want to make sure that I am taken care of throughout my illness. It brought tears to my eyes.” 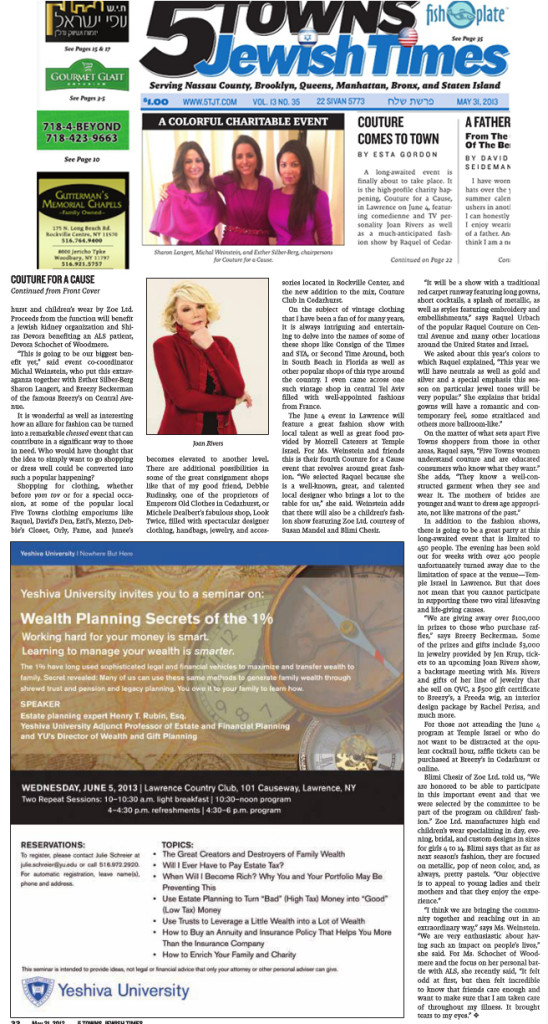