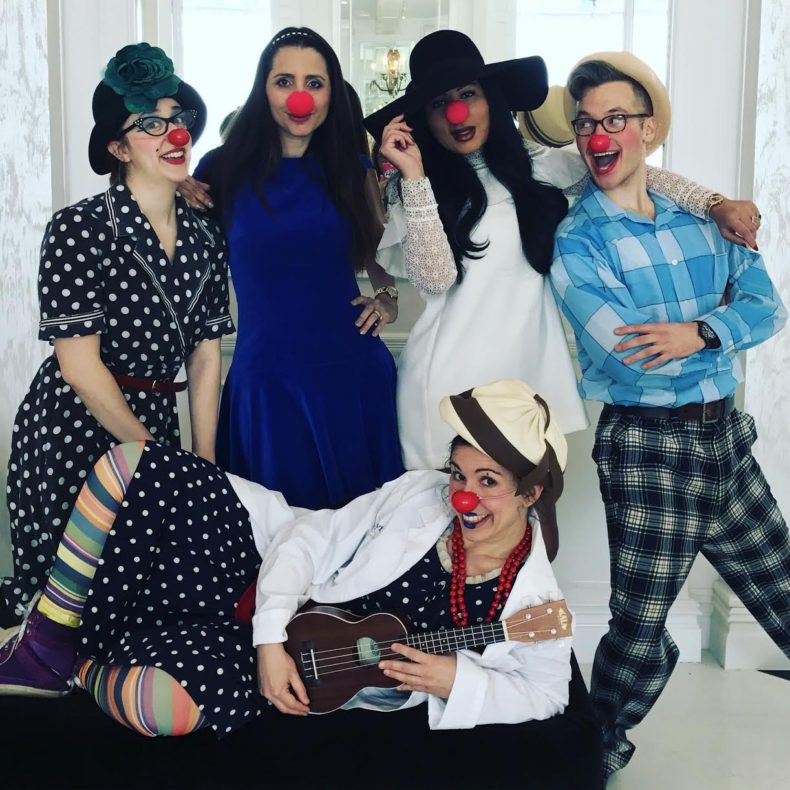 admin 16th Feb 2017 Comments Off on Comedy, Clowning, And Couture in News

The powerhouse team whose motto is “Putting the fabulous in fundraising” is now adding the fun as well. Couture for a Cause, the not-for-profit organization well known for producing glamorous fashion shows for charity, is gearing up for the next big bash on March 2—another gorgeous gala, but this time with a few twists. The March 2 event to benefit the Lev Leytzan organization will not only feature a comedy show and casino night, but will be the first event open to both men and women.

Couture for a Cause was founded by Esther Silber-Berg and Michal Weinstein, philanthropists and childhood friends, in efforts to aide various Jewish charities both local and abroad. Since their premier fashion event in 2007, CFAC has expanded, attracting an ever-growing committee of dedicated women each year.

The CFAC team specializes in producing buzzworthy sold-out events to benefit worthy community causes and bringing notable and fashionable headliners to join along. Last year’s over-the-top event, which raised funds to benefit Sharsheret, featured celebrity designer to the stars Christian Siriano. Other high-profile participants have included the late Joan Rivers. Actor and comedian Elon Gold will lend his talents to entertain the guests this year with his standup routine.

Weinstein is looking forward to the new format and to partnering with Lev Leytzan. “We are extremely excited to open the CFAC doors to men for the first time so they can experience the incredible and meaningful events their wives have been enjoying all these years. We also felt that a comedy night was perfect for a Lev Leytzan fundraiser that brings laughter to the sick and elderly. Being that Purim is right around the corner, it was a match made in heaven.”

Silber-Berg finds extraordinary meaning in the work she does and in this year’s collaboration. “I learned my fashion from my mother and my passion for charity work from my father. Purim is a very special time for my family and is my father’s favorite holiday—growing up, our home in Brooklyn was always known as the place to be on Purim day. Partnering with an organization like Lev Leytzan, especially during this time of year, means the world to me.”

The event will be held at Temple Beth El in Lawrence and promises to be a special evening and a great night out with a full buffet by Seaview Caterers, cocktails, and casino game tables. As every year, there are extravagant fashion, fitness, and beauty-themed packages, courtesy of generous community donors. This year’s amazing lineup of raffles, coordinated once again by CFAC’s Breezy Schwartz, also includes luxury prizes such as a men’s package, complete with a handmade David Lance New York custom suit and diamond cufflinks from Oh My Got Cufflinks, and a complete Passover Seder for 12 prepared by the award-winning Kosher Private Chef. Tickets and raffles are currently available for purchase and viewing online. While tickets for CFAC events typically sell out well in advance, raffles will be on display and available throughout the event.

Visit www.coutureforacauseny.com for more information on tickets and raffle packages.

Q: How did the idea for Lev Leytzan initially come about?

Neal Goldberg: My background is in theater and psychology—it was a synergy of the two disciplines. I had gotten involved with Cirque de Soleil’s social action program and thought that this concept would fill a gap in chesed in the community.

Q: Can anyone train to become a medical clown or does one need to be naturally funny or outgoing to start?

NG: Those traits are actually better suited for birthday-party clowns. Medical clowning is more of a merging of psychology, performance, and emotional openness, and requires a level of discipline and skill-building. We train folks and watch them grow and evolve into different roles.

Q: Is there anything that you want people to know about Lev Leytzan’s projects that they may not be aware of?

Q: What do you think about your collaboration with the Couture for a Cause team?

NG: Partnering with Couture for a Cause has been a dream come true. With Lev Leytzan firmly believing through evidence-based practice that laughter is the best medicine, having such an amazing event highlight our work to such a far-reaching crowd is literally everything we can ask for. The more people who have awareness for the great work we do means the more people we can impact and bring healing and health to. The people at CFAC, namely Michali and Esther, have done all in their power to highlight this goal and help us reach so many new people. We are forever grateful.

Q: They say laughter is the best medicine. Do you find that it simply lifts the spirits or have you witnessed examples of patients healing better?

NG: Yes, there is definitely evidence-based research that it supports the healing process. With Lev Leytzan, laughter is not the only goal; we also focus on engagement with the patients. For example, with our Elder Hearts division, we are meeting people within their realities and it has proven very successful.

Elon Gold: I like to think that laughter is the best medicine . . . but a comedian friend of mine always reminds me that actually medicine is the best medicine! But it is certainly a healing power. The science is there—smiles and carrots are definitely healthy—and on red wine we’re still hoping.

Q: Do you feel a connection to Lev Leytzan and the unique work they do?

EG: Yes, clowning is great! Anything that can put a smile on someone’s face is great. I had the privilege of visiting Steven Spielberg’s mom recently and the night before he asked me if I could “go put a smile on Mom’s face.” Steven Spielberg definitely knows the power of laughter—not that I’m dropping names, of course!

Q: How do you feel about being the headliner on a Couture for a Cause production?

EG: Going from Christian Siriano to Elon Gold—that is definitely a step up in the Jewish world, but more importantly in the fashion world—where I’m really well known. Since CFAC is usually a fashion show, on the off chance that I don’t have a great show, I’ll just start strutting my stuff!

Q: Do you enjoy knowing that your work can entertain and also benefit others?

EG: Seriously, I love putting the fun in fundraising. There are so many rubber-chicken-type dinners, and if I can lend my G‑d-given talents to get people excited about a cause and give them an hour of laughter, I just love it. We need things to look forward to these days. The way to break up unpleasantries is through smiling and laughing together.