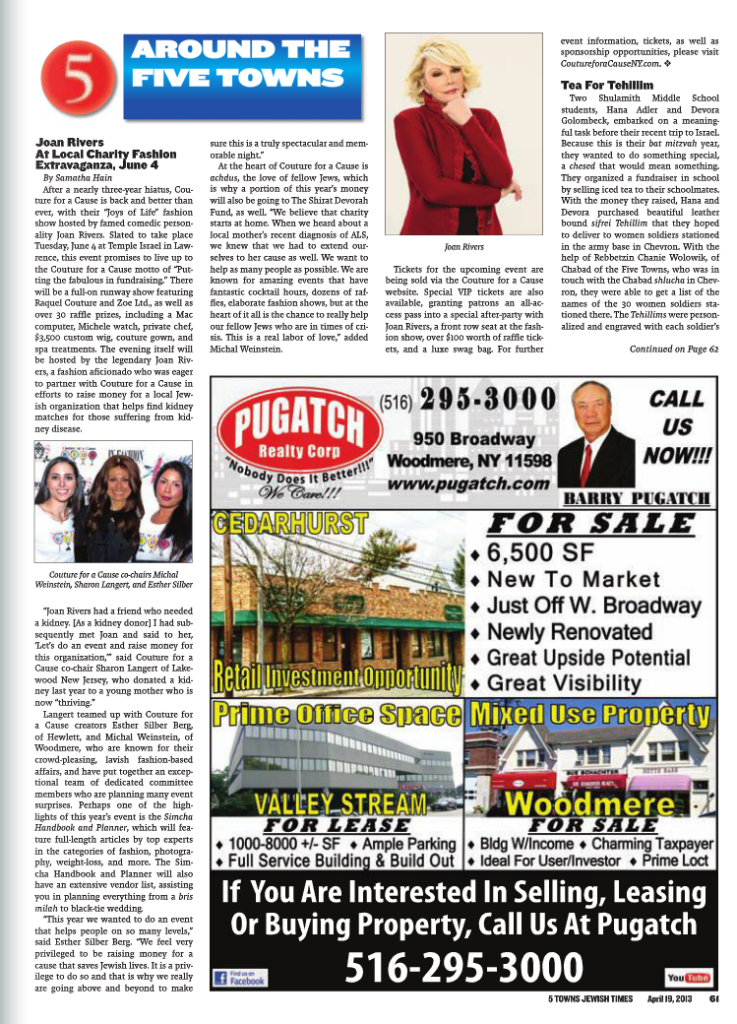 After a nearly three year hiatus, Couture for a Cause is back and better than ever with their “Joys of Life” fashion show hosted by famed comedic personality Joan Rivers. Slated to take place Tuesday, June 4 at Temple Israel in Lawrence, this event promises to live up to the Couture for a Cause motto of “Putting the fabulous in fundraising,” as there will be a full-on runway show featuring Raquel Couture and Zoe Ltd., as well as over 30 raffles, including a Mac computer, Michelle watch, private chef, $3,500 custom wig, couture gown, and spa treatments. The evening itself will be hosted by the legendary Joan Rivers, a fashion aficionado who was eager to partner with Couture for a Cause in efforts to raise money for a local Jewish organization that helps to find kidney matches for those suffering from kidney disease.

“Joan Rivers had a friend who needed a kidney. [As a kidney donor] I had subsequently met Joan and said to her, ‘Let’s do an event and raise money for this organization,’” said Couture for a Cause Co-Chair Sharon Langert, of Lakewood New Jersey, who donated a kidney last year to a young mother who is now “thriving.”

Langert teamed up with Couture for a Cause creators Esther Silber Berg, of Hewlett, and Michal Weinstein of Woodmere, who are known for their crowd-pleasing, lavish fashion-based affairs, and have put together an exceptional team of dedicated committee members who are planning many event surprises. Perhaps one of the highlights of this year’s event is the Simcha Handbook and Planner, which will feature full-length articles by top experts in the categories of fashion, photography, weight-loss and more. The Simcha Handbook and Planner will also have an extensive vendor list, assisting you in planning everything from a bris milah to black-tie wedding.

“This year we wanted to do an event that helps people on so many levels,” said Esther Silber Berg. “We feel very privileged to be raising money for a cause that saves Jewish lives. It is a privilege to do so and that is why we really are going above and beyond to make sure this is a truly spectacular and memorable night.”

At the heart of Couture for a Cause is achdus, the love of fellow Jews, which is why a portion of this year’s money will also be going to The Shirat Devorah Fund, as well.

“We believe that charity starts at home. When we heard about a local mother’s recent diagnosis of ALS, we knew that we had to extend ourselves to her cause as well. We want to help as many people as possible. We are known for amazing events that have fantastic cocktail hours, dozens of raffles, elebaorate fashion shows, but at the heart of it all is the chance to really help our fellow Jews who are in times of crisis. This is a real labor of love,” added Michal Weinstein.

Tickets for the upcoming event are already being sold via the Couture for a Cause website. Special VIP tickets are also availible, granting patrons an all-access pass into a special after party with Joan Rivers, a front row seat at the fashion show, over $100 worth of raffle tickets and a luxe swag bag.